Slaughter’s first ad is a positive take on jobs. She’s also looking good and standing up.  The the ad appears to have been recorded at her Hickey-Freeman media event earlier this month.

The first debate in the NY-25 race will be on News 8 October 30 at 8 PM. It will be sponsored by the League of Women Voters. Maggie Brooks has called for 6 debates, but this is the only one Louise Slaughter has agreed to attend so far.

YNN has dueling statements from Brooks and Slaughter on the rape comments Here’s Slaughter:

Maggie Brooks has been deliberately hiding her anti-choice views from the public during this campaign, and has repeatedly aligned herself with some of the most conservative voices in Washington who have tried to strip women of their health care rights and redefine rape to satisfy their radical ideologies. The only thing we really know about Maggie Brooks is that she’s willing to take money from any right-wing group that will try to buy her a seat in Congress.

Louise Slaughter should be ashamed of this outrageous and dishonest attack on Maggie Brooks’ character. It’s sad to see Louise bring her hyper-partisan brand of Washington politics to our community. The voters of Monroe County know and trust Maggie and her record of protecting taxpayers, and won’t be fooled by Louise’s dirty tricks.

That statement says nothing about Brooks’ position on “forcible rape” or the rape exemption for abortion in general, so we’re left to assume that Brooks doesn’t want to talk about it. When a campaign resorts to “I’m rubber, you’re glue”, it’s because they don’t want to address the underlying issue, and that’s clearly what’s going on here. 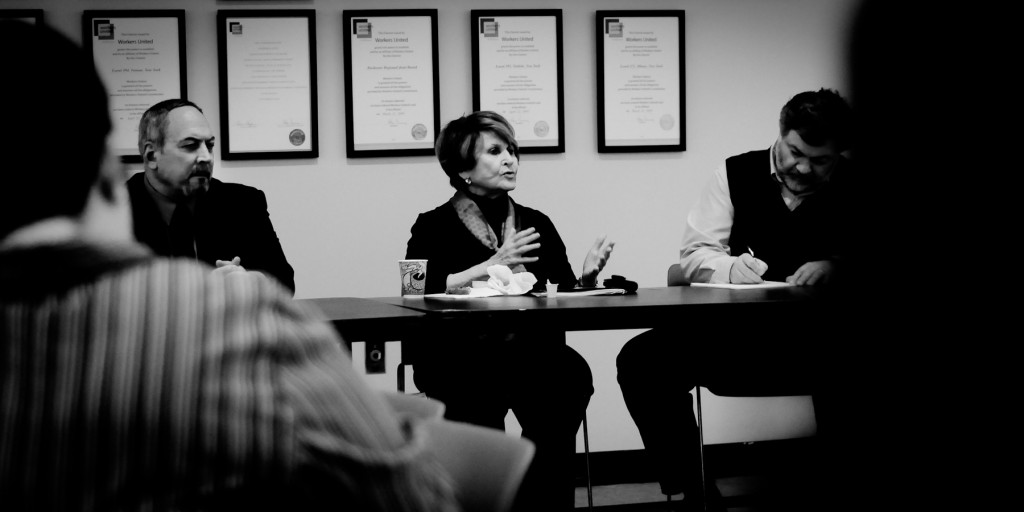 Maggie was indeed very quick to condemn Akin’s statement, but what about Paul Ryan and the rest of the Republicans in the House who co-sponsored a bill containing language referring to “forcible” rape, language that was removed only after an intense media firestorm. Does Maggie, like Paul Ryan, think that Congress should draw a distinction between forcible rape and other kinds of rape when it comes to abortion? Or does she condemn that?

By the way, this is apparently the “lie” that Brooks is referring to, from a Slaughter fundraising letter:

My “pro-life” opponent has continued to take tens of thousands of dollars and endorsements from those attacking women’s health, including Paul Ryan who has been working with Rep. Akin to redefine rape this entire Congress.

Ryan co-sponsored the bill with the original language. Maggie “applauded” the choice of Congressman Ryan. Maggie got money from at least three of the co-sponsors of the forcible rape bill (Roskum, Grimm and Sam Johnson on the last fundraising report). Where’s the lie here?

Maggie Brooks seems a little shaken by the nomination of the Grim Reaper of Medicare, Paul Ryan, to the Republican ticket, since she’s repeating the same lie that Mitt Romney used when he introduced Ryan this weekend. The $700 billion figure is a mainly a cut to the wasteful Medicare Advantage program, which is a failed experiment in using private insurers to provide Medicare coverage. Medicare Advantage is less efficient, so seniors on that program will be moved to regular Medicare–nobody’s losing anything. Alan Bedenko fully destroys the myth of the $700 billion cut today if you want all the details, so instead of focusing on that, let’s move on to what Brooks is trying to hide, courtesy of the Associated Press:

ROMNEY: “Unlike the current president, who has cut Medicare funding by $700 billion, we will preserve and protect Medicare and Social Security and keep them there for future generations.”

THE FACTS: You could fill an arena with all the details left out in this statement. Ryan’s reputation as a fiscal conservative is built on a budget plan that would overhaul the Medicare program and introduce a voucher-like plan that future retirees could use to buy private health insurance. Whether that results in a better or worse situation for Medicare recipients is a matter of debate. But under Ryan’s plan, traditional Medicare would no longer be the health insurance mainstay, just one of many competing options.

The nonpartisan Congressional Budget Office estimates the Ryan plan — which Romney endorsed in broad strokes in the past — would slow the increases in money for seniors. A typical 66-year-old would receive about 35 percent more than last year — $7,400 in 2011 dollars. Under current law, that person would probably receive at least 56 percent more in 2030, and quite possibly 75 percent more — $9,600 in 2011 dollars. The CBO said his plan grows spending for Medicare enrollees “at a much slower rate” than under current law or other policy scenarios. In Washington, a slower increase in spending is tantamount to a spending cut.

Romney’s assertion that the team would preserve Social Security left out the fact that he proposes significant change. He would protect the status quo for people 55 and over but, for the next generations of retirees, raise the retirement age for full benefits by one or two years and reduce inflation increases in benefits for wealthier recipients. At least with this program, he has offered more specifics than President Barack Obama has in dealing with the entitlement’s long-term financing shortfall, though neither has laid out a comprehensive solution.

As for his accusation that the president cut Medicare, Obama’s health care law does cut billions from the Medicare Advantage program, hospitals and nursing homes, to pay for expanded insurance coverage.

Maggie Brooks doesn’t want to run on Medicare vouchers, and who can blame her? I don’t know anyone who’s 80 years old who thinks they can buy as good a policy as Medicare for $7,400 today, much less for a few thousand dollars more 18 long years from now. It’s no exaggeration to say that the Ryan plan is the death of Medicare, and Maggie’s right to fear the reaper, because voters won’t be happy once they learn more about the number two guy at the top of her party’s ticket. 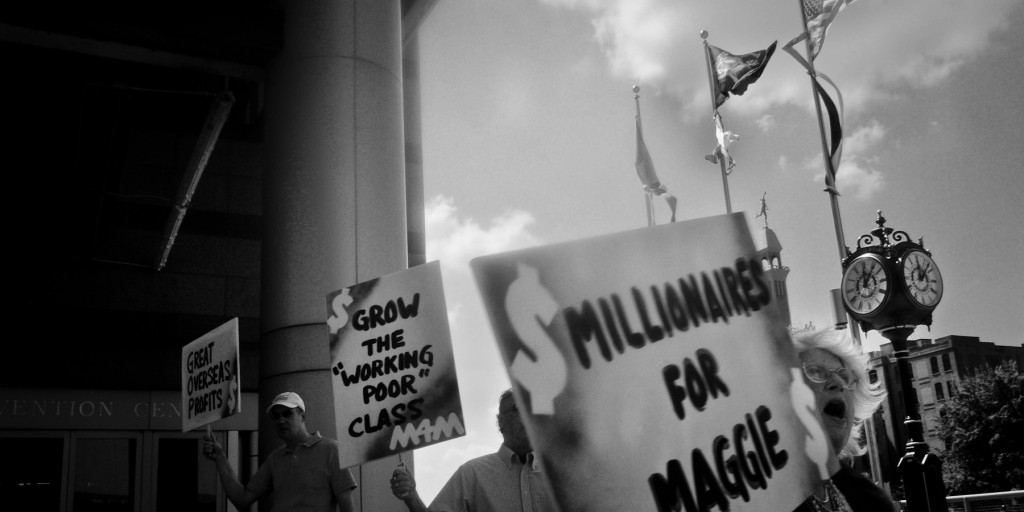 ROCHESTER, NY- So goes the chant with which the dozen or so protesters greeted House Speaker John Boehner at the Rochester Riverside Convention Center for a Maggie Brooks fundraiser Saturday.  Dressed in furs, they proclaimed themselves “Millionaires for Maggie” and put on a bit of a show that was at the very least entertaining.   Protesters always spice up a campaign and as we round the 100 day mark before the election, it seems like time for a little more spice (and substance) from both sides in this campaign.

Maggie Brooks’ campaign has announced that they’ll report $530K for the second quarter, which means they raised more than $350K in June, which is an impressive number by any standard.  Capitol Tonight has the full press release.

The Slaughter campaign’s latest press release claims that her second quarter filing will show that she’s raised more than $530K.  Based on the last filing, which covered the period through the beginning of June, this means that Slaughter raised over $250K in one month, which puts her on track to have raised over $1 million this cycle.  I’ve included the full press release after the break: END_OF_DOCUMENT_TOKEN_TO_BE_REPLACED

Lucy at Mustard Street found Kathy Hochul ducking the Democratic Convention, which is probably a smart move since her race in the Republican (R+7) NY-27 (formerly NY-26) is rated as a toss-up by Charlie Cook. But now that we have a contested race in Democratic (D+3) NY-25, the question is whether Maggie Brooks will follow Hochul’s lead and run away from her party.

Republicans in tight races are throwing the Ryan Plan under the bus in West Virginia and Montana.  Here’s the language Rep. David McKinley (R-WV-1) used in one of his mailers:

“Congressman McKinley recently voted against the 2012 budget passed by the House because of the plan’s negative impact on northern West Virginia seniors,” the mailers read. “The plan would privatize Medicare for future retirees, raise the retirement age and keep in place the Medicare cuts included in last year’s healthcare bill. The Congressional Budget Office determined the plan would nearly double out-of-pocket healthcare costs for future retirees.”

Maggie’s brand-new issue page mentions that she’ll vote to repeal Obamacare to “restore Medicare”, which is an odd statement to make since Medicare hasn’t been diminished by Obamacare (a fact which has been fact-checked to death yet Republicans still claim it.) The real threat to Medicare in this election, as Maggie’s Republican brethren in West Virginia and Montana correctly identify, is a Republican House that will vote for the Ryan plan.