Maggie Brooks has picked up the Independence and Conservative endorsements, and Louise Slaughter got the Working Families Party line, so there won’t be any spoiler candidates in the NY-25 race.

The House just voted to pass Paul Ryan’s budget plan, with 10 Republicans, most of them concerned that the plan didn’t go far enough, voting “No”. A key component of the Ryan plan would be a transformation of Medicare from a defined-benefit plan to a defined-premium plan. In other words, those under 55 would be given a voucher to purchase insurance instead of the current coverage of Medicare. Since the Ryan plan would roll back Obamacare, the independent, non-partisan Congressional Budget Office (CBO) has also shown that the number of uninsured would go up, in addition to the amount being spent on Medicare going down.

The Ryan plan also cut taxes for millionaires by somewhere in the neighborhood of $150,000 per year, or more, depending on underlying assumptions (here’s a think tank report that estimates it at $187,000/year).

Slaughter is on the record opposing the Ryan plan, having made a six-minute speech on the floor of the House where she calls it “morally bankrupt”. Louise pegs the tax break at a whopping $300,000. Since the whole thing is based on estimates, there’s no benefit in Slaughter’s opponent quibbling with her math, since doing so just highlights the fact that Republicans passed another tax break for the rich.

Clearly the Ryan plan is not good political news for a Republican trying to run as a moderate. Brooks has ducked comment, going as far to characterize it as one of the “inside the Beltway” issues that she’s not going to concern herself with immediately. That’s not going to hold up. But, even if Brooks says she wouldn’t have voted for it, the logical follow-up is why voters should believe her. Bob Turner, who won Anthony Weiner’s old seat in part by pledging to vote against the Ryan budget, voted for it this week. That kind of reversal a few short months after being elected is certainly something the Slaughter campaign will highlight in ads later this year.

Benjamin Wachs, writing for the Messenger-Post papers, has a pretty good column explaining why Maggie Brooks’ attempt to run what he calls a “generic” campaign just won’t work against Slaughter.

Update: As Jeremy Moule pointed out on Twitter, Brooks announced at the GOP headquarters, so Wachs’ column is wrong.

Aaron Wicks at the Smugtown Beacon points out that Republican Congressional candidates got shellacked in the towns of the new NY-25 in 2008, by a factor of 63-37%, better than the roughly 60-40% Obama-McCain margin, and he thinks that’s good news for Republicans. His argument is that if there were a better Republican challenger, the margin would be tighter.

That’s true, but Wicks looks at these numbers, which are horrible for Republicans no matter how you slice them, and asserts that Brooks will win by an enormous 54-46% margin. No reasonable analyst has this race anywhere near there–all the services that charge money think this election tilts towards Slaughter and Brooks could at best edge her out in a hard-fought battle. Should we pay attention to Wicks?

My take is no, and here’s my reasoning: There are two kinds of contrarians. The first listens to the conventional wisdom, looks at the facts, and points out how they support a different conclusion. This type of contrarian is worth your attention, since they aren’t just reflexively saying “up” when everyone else says “down” to get your attention. The second type of contrarian is someone who looks at the facts, ignores them, and listens to his gut. As Stephen Colbert says about the gut’s role in logic, “I trust it so much, it’s where I put all my food.” In other words, Wicks probably could be trusted with a cheeseburger, but I don’t think I’ll trust his take on this election.

Maggie Brooks was named Republican Woman of the Year at a gathering of Republican women in Albany.

I just got a fundraising letter from the Slaughter campaign asking for money to fight what she calls “misleading robo-calls”. Here’s what the calls say:

Hello, I’m calling from the National Republican Congressional Committee with an important alert about your Congressman Louise Slaughter. Slaughter voted for the government takeover of healthcare which cuts $500 billion from Medicare and is going to cost taxpayers nearly double what Washington politicians claimed. Slaughter’s plan even empowers unelected bureaucrats to make decisions that could deny access and raise the cost of care. Call Louise Slaughter at 202-225-3615 and tell her enough is enough and to keep her hands off our healthcare. Paid for by the National Republican Congressional Committee. Not authorized by any candidate or candidate’s committee. 320 First Street SE, Washington, DC 20003. 202.479.7000

If you heard that call, you’d think that $500 billion was cut from Medicare benefits, but no benefits were cut, just some budget juggling, as every fact-checking organization agreed when this came up in 2010 (here’s CNN’s analysis, but you can use Google to find a dozen other, similar articles).

The CSEA, which is a AFSCME chapter representing State of New York workers, has released this video encouraging everybody to ask if Maggie Brooks is campaigning on Monroe County’s dime. Of course, the same question could be asked of Louise Slaughter, who will also be doing her day job while running for Congress.

The difference between Maggie and Louise is that Louise must follow the rules set out in a 400-page House ethics manual [pdf]. If CSEA wants to make this an issue, one way to do it would be to find the Monroe County ethics rules and tell us how Maggie could be violating them. I can’t find the ethics standards on the County’s website, even though a new ethics training program was announced with much fanfare shortly after the ROBUTRAD scandal broke. Perhaps the CSEA could FOIL that manual and let us all know what it says.

Next door in the new NY-27, former Erie County exec Chris Collins will be face off in a primary against highly decorated and very conservative Iraq War vet David Bellavia. According to Alan Bedenko (Buffalopundit), Bellavia will receive support from Jack Davis, a millionaire serial candidate for Congress. Davis alternated between running as a Democrat and a Republican during the last few cycles, while consistently remaining a bitter old man with zero retail political skills. He’s planning to inject his money and vitriol into the NY-27 race in the form a SuperPAC that will advertise on behalf of Bellavia.

Because the new NY-27 encompasses some Monroe County towns and neighboring counties south and west of Rochester, Davis’ PAC will probably buy a fair amount of  advertising in the Rochester market. Collins, like Brooks, is a middle-of-the-road, pork-friendly Republican who doesn’t want to talk about social issues. Pro-Bellavia ads will expose Rochester voters to attacks on a moderate Republican from the right, and Rochester media will no doubt ask Maggie Brooks whether the substance of those attacks also apply to her.

In addition to making trouble for Collins in the Republican primary, Bellavia (with Davis’ money behind him) is a logical choice for the Conservative party line. If he wins that and Collins wins the Republican Primary, we’ll have the wet dream of every Democrat in the new NY-27, which is a Dede Scozzafava situation where conservatives split between Collins and Bellavia. That’s relevant to NY-25 because Bellavia ads in the Fall will continue to put far-right ideology in front of NY-25 voters. Maggie will either have to disavow that ideology (and alienate her base), or embrace it (and alienate moderates). 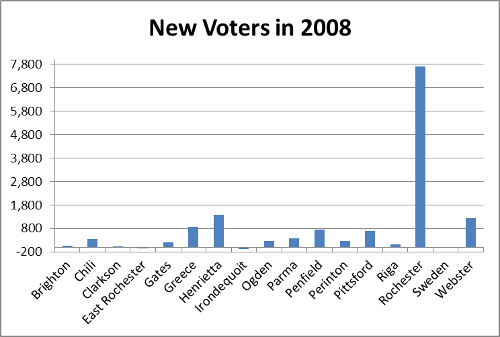 In 2008, around 14,000 more voters voted in the towns and cities of the new 25th than voted in 2004. 55% of the bigger turnout came from the city. The city voted for Obama by an 81-17 margin, versus a 71-26 margin for Kerry vs Bush. The key question for Slaughter is whether these voters will turn out again in 2012. I’ll have some analysis at the House race level soon, but for now I’m using the Presidential election as a proxy for a tough contest between a Democrat and a Republican.

I’m going to pick three statements from Curt Smith’s column in the Webster Post to show why nobody should listen to this guy:

Knowing [that Maggie is a good candidate], Louise last year began to slightly curb her liberalism, as private polls show Brooks at least even.

Never trust anyone referring to a “private poll” because the privacy of the poll means that you don’t know what was asked, to whom, and when. Without that information, you know nothing about the poll. Either Curt knows this and chose to mention the poll anyway, or he actually believes that the poll is worth mentioning. Either way, he’s misleading the readers of the Post.

As for Louise’s supposed new-found conservatism, National Journal gave her an 89% liberal score last month. Barney Frank got 91%. In 2010, Louise was scored at 91%.  Barney was 93%. Either Barney is curbing his liberalism in exactly the same ratio as Louise, even though he’s retiring and has nothing to lose, or Curt just pulled that little assertion out of thin air.

I might be willing to accept that the indictment and conviction of some of Maggie’s staff will not be a major issue in this election, but I’m not willing to do that without an argument, and neither should Curt’s readers.

Even though Curt could’t be bothered to do serious political analysis, he did name check  Doris Day (last movie: 1968) and Red Barber (last breath: 1992), and he references Thelma and Louise (released: 1991) to make a point about feminism. Curt seems like a pleasant fellow and I honestly do hate to pick on him, but if he would just become a mental as well as physical inhabitant of the current century, his analysis might have some relevance to this year’s race in NY-25.

Liz Benjamin at YNN has the latest Gillibrand fundraising letter, which asks for money for Kathy Hochul and Louise Slaughter. Gillibrand can afford to be magnanimous because the recent Republican convention in Rochester ratified what was already obvious: she’s going to cruise to an easy re-election win against a second- or third-tier token Republican challenger. This is a double-edged sword for Slaughter. On one hand, it means that Gillibrand will be able to campaign for Slaughter, Hochul and other down-ticket candidates, since her re-election campaign will be a formality. On the other hand, since she won’t have a serious competitor, her campaign won’t put on a full-press get-out-the-vote effort, which means that Slaughter will be relying on her own effort, and that of the Monroe County Democratic Party, which is mediocre at best at getting voters to the polls.